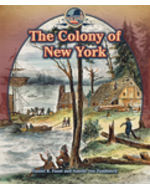 Backed by the latest scholarly research, this book chronicles the history of early New York, how it became a British colony, and what life was like in colonial New York. Demonstrates how New York was a land of innovative, free-thinking individuals who took advantage of the natural resources around them. Addresses key events in colonial New York--including the founding of the British colony and the French and Indian War--as well as key figures, such as King Charles II and Robert R. Livingston.