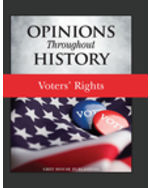 This volume tackles not only the topic of voter suppression, but how public opinion influenced action on voters' rights, from the founding of the country, when most states limited the right to vote to property-owning males, to the establishment in 2017 of the Presidential Advisory Commission of Election Integrity, and beyond, to how voter suppression efforts effected the 2018 elections. Drawing from the popular press, key legislative and court battles, social activism and opinion polls, content in this edition follows the evolution of public opinion on voters' rights, including: how the vote was granted to minorities; Jim Crow laws (i.e. poll taxes and literacy tests); Voting Rights Act of 1965 and subsequent relevant Supreme Court decisions; voter ID laws; voter fraud; election interference; and specific individual state actions.

Front Cover.
Title Page.
Copyright Page.
Table of Contents.
Publisher’s Note.
Introduction.
Historical Timeline.
1: The Right of Ownership.
2: Establishing American Theocracy.
3: Outliers.
4: America is not a Direct Democracy.
5: Owning the Vote.
6: Engendering Citizenship.
7: A Hierarchy of Race.
8: Voting Rights for People of Color.
9: Serpents of Massachusetts.
10: Women’s Work.
11: Indigenous Rights.
12: The Statistics Race.
13: Paying to Vote.
14: Civil Rights and Voting Rights.
15: Age of Citizenship.
16: Reading the Fine Print.
17: The Fight for Access.
18: Voting at Home.
19: Losing the Right to Vote.
20: The Voting State of Mind.
21: A Citizen’s Right.
22: The Unpopular Vote.
23: Identity and The Right to Vote.
24: The Right to Change.
25: Interference and Ideology.
26: The Specter of Fraud.
27: Modernizing the Vote.
28: Getting out the Vote.
29: Conclusion.
Notes.
Primary & Secondary Sources.
Glossary.
Historical Snapshots.
Bibliography.
About the Author.
Index.