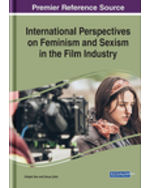 
International Perspectives on Feminism and Sexism in the Film Industry, 1st Edition

Gender studies is a heavily researched field. However, women and their role in cinema is a vastly understudied topic that deals with various aspects of feminism and sexism. The function of women in the film industry has evolved over time and proven to be an interesting area of research regarding the transition from sexual icons to respected professionals. Feminism is a widely researched subject, yet its specific application within cinema is an area that has yet to be studied. This essential reference source examines the representation of women in cinema and provides a feminist approach to various aspects of the film industry including labor, production, and the cultural impact of women in motion pictures. Topics include violence against women, feminist film theory, and psychoanalysis. For directors, industry professionals, writers, screenwriters, activists, professors, students, administrators, and researchers of film studies, gender studies, mass media, and communications.

Front Cover.
Title Page.
Copyright Page.
Advances in Media, Entertainment, and the Arts (AMEA) Book Series.
Editorial Advisory Board.
Table of Contents.
Detailed Table of Contents.
Foreword.
Preface.
Acknowledgment.
1: The Representation of Women in Feminist Cinema: Fried Green Tomatoes as a Revolt Against Patriarchal System.
2: Otherization of Oriental Woman in Cinema.
3: Mental Illness and Women in Cinema: “Beautiful and Troubled Women”.
4: A Feminist Perspective Analysis of Gender in Cinema of Saudi Arabia: Wadjda.
5: Gendered Genre: Melodrama and Classical Turkish Melodramas.
6: The Language of Family Communication of Mother Character in Recent Films.
7: Space as a Means of Stigma for Women in Turkish Cinema After 2000: The Case of the Film Mutluluk.
8: Representation of Women in the Connecting of the Public Space Area/Special Area: Mother!.
9: Paris/Europe Image as a Modernization Place in Turkish Cinema.
10: Images of Women Resisting the Tide.
11: A Woman Director in the History of Animated Film: Lotte Reiniger’s Film Aesthetics.
12: Feminist Discourse in Animated Films.
13: Labelling Directors as “Women”.
14: Masculine Domination and Gender in Bourdieusian Sociology: The Case of Roma Movie.
15: Deleuzian Feminism: Becoming Woman in New Turkey Cinema.
16: Woman Representation in Turkish Detective Series: Şahsiyet.
Compilation of References.
About the Contributors.
Index.