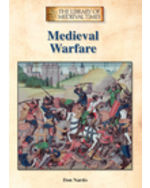 Warfare in medieval Europe most often centered on capturing castles, and sieges of those fortresses, as well as fortified towns, became long and highly elaborate affairs featuring a wide array of weapons and techniques. Though they occurred less often, pitched battles in which thousands of foot soldiers and mounted warriors clashed were equally spectacular and often decided the fates of kings and entire nations. Meanwhile, the late medieval centuries witnessed technological advances that introduced the first cannons and hand-held guns, lethal devices destined to render both castle defenses and cavalry charges obsolete.