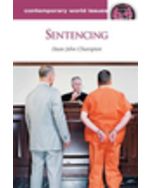 Sentencing: A Reference Handbook offers a complete overview of the complex sentencing procedures devised by the federal government and each of the 50 states.

Too lenient? Too harsh? Biased against minorities and the poor? Too easily influenced by public opinion or defiantly nonresponsive to it? The process of determining punishment for convicted criminals in the United States has no end of critics from across the political spectrum. But exactly how are sentences determined in state and federal courts? Have efforts to deter crime through harsher sentences proven effective? From the Code of Hammurabi (1800 BC) to the present, Sentencing: A Reference Handbook follows the historical evolution of the process of criminal punishment, then focuses on the U.S. judicial system to show how American sentencing laws have changed in response to surges of different types of crime, or to other factors such as prison overcrowding.

To help readers understand the complex issue of criminal sentencing, this informative volume describes the major sentencing procedures used in American courts (determinate, indeterminate, guidelines-based, and mandatory), highlighting the merits and flaws of each with well-documented cases and examples. Coverage includes a range of contentious issues, including the disproportionate application of the death penalty, sex offender laws, punishing the addicted and the mentally ill, and balancing punishment with rehabilitation.