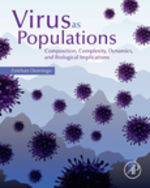 This book explains fundamental concepts that arise from regarding viruses as complex populations when replicating in infected hosts. Fundamental phenomena in virus behavior, such as adaptation to changing environments, capacity to produce disease, probability to be transmitted or response to treatment, depend on virus population numbers and in the variations of such population numbers.