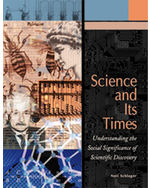 Science and Its Times, 1st Edition

The histories of science, technology and mathematics merge with the study of humanities and social science in this interdisciplinary reference work. Combining essays on people, theories, discoveries and concepts with overviews, primary documents and chronological elements, Science and Its Times offers students a fascinating way to understand the impact of science on the course of human history and how science affects everyday life.

With coverage from about 2000 B.C. through the end of the 20th century, Science and Its Times features approximately 2,000 entries representing people and developments throughout the world. Examples include:

The set's eight volumes are divided by time period and each includes the same broad subject chapters and features. Central to each chapter are topical subchapters on physical sciences, life sciences, technology, mathematics, medicine and health. Each of these features 25-30 essays of 1,500 to 3,000 words, 30 biographical entries of 500 to 1,000 words and about 100 brief biographical profiles.

Volumes also include subject specific chronologies and introductory essays, a general bibliography, a glossary, a master index and more. In addition, brief sidebar essays highlight subjects of interests along with about 150 photos, illustrations and diagrams per volume.

"This new series will be very useful to students of science history and the impact of developing technologies. … Good coverage is provided for important historical figures. The explanations of the technologies involved are clear and give a sense of the groundbreaking work the scientists were involved in. … This series will be a welcome addition to reference collections of high-school, public, and academic libraries." — Reference Books Bulletin/Booklist (Oct. 1, 2000)

"This is a wonderful book that emphasizes the relationship between science and society. The interdisciplinary format gives the reader an understanding of the social significance of scientific progress...Individual essays track the creation and evolution debate through the related science, state legislatures, courts, and organizations such as the Creation Research Society...This interdisciplinary, comprehensive approach shows how an idea in one field may become a foundation for another, and how a person known for contributions in one area may be recognized for different contributions in another. The language is clear, ideas are not left hanging, and the reader is not forced to make great intuitive leaps...The book will be of real value to those who want to understand how science has impacted and challenged the human spirit. It should have a place in every secondary school library, and its intrinsic value will only increase with the years." -- Science Teacher (March 2002)

"[C]overs the interaction between society and science, providing a wealth of information in a clear, easy-to-read format. … The clear print and layout make the source easy to use, and the information is well worth the purchase price. … Recommended for college, university, and large public libraries." — CHOICE (December 2000)