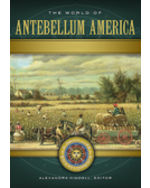 Throughout the Antebellum Era resonated the theme of change: migration, urban growth, the economy, and the growing divide between North and South all led to great changes to which Americans had to respond. By gathering the important aspects of antebellum Americans' lives into an encyclopedia, this book provides readers with the opportunity to understand how people across America lived and worked, what politics meant to them, and how they shaped or were shaped by economics. Entries on simple topics such as bread and biscuits explore workers' need for calories, the role of agriculture, and gendered divisions of labor, while entries on more complex topics, such as aging and death, disclose Americans' feelings about life itself. Collectively, the entries pull the reader into the lives of ordinary Americans, while section introductions tie together the entries and provide an overarching narrative that primes readers to understand key concepts about antebellum America before delving into Americans' lives in detail.