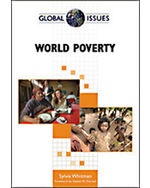 Although poverty has decreased over the past two centuries, about 40 percent of the world's population still lives on less than $2 per day. Approximately one in seven people - just under one billion - subsist on less than $1 per day. The most extreme cases of poverty surface in the least developed countries of the world, particularly in heavily populated South Asia and sub-Saharan Africa, as well as in rural areas within those regions. Although the United States is considered the richest country in the world, it has the highest poverty rate among industrialized nations. As prosperity has increased, so too has inequality, not only around the globe but also within countries.

World Poverty explores how to define, measure, and keep track of poverty; the causes of poverty; and counterstrategies. Detailed case studies examine the situations in the United States, India, Syria, the Democratic Republic of the Congo, Guatemala, and the Ukraine, and investigate the strategies that these national governments have adopted to fight poverty.