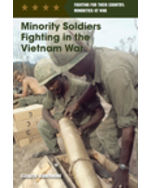 Fighting for Their Country: Minorities at War: Minority Soldiers Fighting in the Vietnam War, 1st Edition

The Vietnam War was the first war that was fought from the outset by completely desegregated American troops. However, racism was abundant during the war, and the percentage of minority casualties were substantially higher than that of white troops because minority soldiers were often positioned on the front lines. This book provides a close look at the role of African American and Hispanic soldiers in the war while also explaining the quest for racial equality in the Vietnam era.