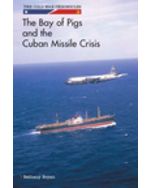 The Cold War Chronicles: The Bay of Pigs and the Cuban Missile Crisis, 1st Edition

United States president John F. Kennedy advocated an invasion of Cuba. Led by anti-Castro supporters, the Bay of Pigs invasion was unsuccessful. Castro understood the invasion as an attempt to overthrow his government. After this unsuccessful event, the two superpowers of the United States and the Soviet Union came close to a nuclear confrontation. This book takes a closer look at this dramatic conflict and the tensions that emerged from the threat of nuclear power.