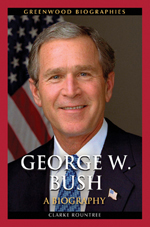 George W. Bush served as president of the United States through some of the most pivotal and memorable events in our nation's history, including the terrorist attacks of September 11, 2001; Hurricane Katrina; and the devastating economic downturn at the end of his second term. It is still too soon to decide how history will judge his administration. Despite suffering much ridicule and scorn for his linguistic gaffes, which became known as "Bushisms," the fact remains that this Yale graduate eventually rose to become a two-term Texas governor and a two-term U.S. president. GEORGE W. BUSH: A BIOGRAPHY provides a comprehensive view of Bush's life, beginning with his childhood and education, then examining his life as a businessman; his governorships of Texas; his tumultuous, two-term presidency of the United States; and his life after leaving the White House.