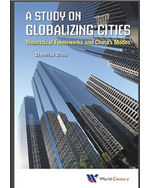 A Study on Globalizing Cities is the latest masterpiece by Zhou Zhenhua, a famous Chinese economist, who closely tracks the theoretical study of global cities and is actively engaged in the strategic research of Shanghais development.With rich empirical data and an in-depth analysis, this book is of great theoretical and practical significance. Different from studies on global cities by renowned western scholars, this book extends its perspective to globalizing cities. It explores a unique development model for Chinas globalizing cities by adopting a creative angle of observation and analytical methods. By criticizing that the traditional global city theory derives the logic relations of global cities directly from globalization, Mr Zhou puts forward the concept of globalization city, which is introduced as a new intermediate explanatory variable. More importantly, this book emphasizes that the building of global cities is not only dependent on the distribution of urban space and urban economic development but also on comprehensive construction of multiple structures and functions of cities.Contents:Literature ReviewGlobalization, Informatization, and the Change of the World City SystemGlobal City Networks and Their NodesRegions of Global Cities: A New Spatial StructureRise of Global Cities: Prerequisite and Positioning Strategic TargetPath Dependence of Globalizing CitiesRelations of Competition and Cooperation During the Rise of Global CitiesStrategy Oriented by Flow Expansion and Its Development ModeIndustrial Base of the Leading Service EconomyEvolution of Spatial Structure of Globalizing CitiesCreative Cities and Cultural CreativitySystemic Framework of Citys Governing StructureReadership: Undergraduates, graduates, academics, economists, urbanologists, sociologists, and municipal governors who are interested in globalization and Chinas urban development.