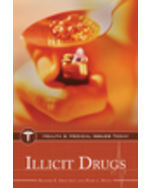 This volume compiles information and materials documenting ILLICIT DRUGS and their use from multiple perspectives. Some 20 million Americans, or 8 percent of the population of the United States aged 12 and older, use marijuana, cocaine, heroin, amphetamines, ecstasy, or other illicit drugs. The cost to our society is enormous, more than $300 billion annually for related expenses such as health care and treatment, social services, law enforcement, and losses due to crime. Illicit drug use is a deeply embedded characteristic of most societies, resulting in illness, death, crime and violence, terrorism, imprisonment, property confiscation, and massive allocations of government resources. This work provides information for those seeking to understand the nature and scope of this far-reaching problem, as well as major issues of concern and debate surrounding it. Organized thematically, the book begins with an overview of illicit drug use and abuse, including its history and risk factors. The scope of illicit drug use in the United States is covered, including conditions that encourage the practice, costs, related policies and programs, and prevention and treatment considerations. The book looks at populations at risk, including children and youth, women, older adults, and racial and ethnic minorities. International aspects of illicit drugs, such as production, trafficking, and consumption are also examined.