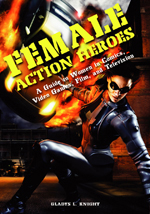 Offers profiles of some of the most popular female action heroes throughout the history of film, television, comic books, and video games. Female action heroes, like other fictional characters, not only reveal a lot about society, but greatly influence individuals in society. It is no surprise that the gradual development and increase in the number of female action heroes coincides with societal changes and social movements, such as feminism. Nor is it a surprise that characteristics of female action heroes echo the progressive toughening of women and young girls in the media. FEMALE ACTION HEROES: A GUIDE TO WOMEN IN COMICS, VIDEO GAMES, FILM, AND TELEVISION brings to the forefront the historical representation of women and girls in film, television, comic books, and video games. The book includes profiles of 25 of the most popular female action heroes, arranged in alphabetical order for easy reference. Each chapter includes sections on the hero's origins, her power suit, weapons, abilities, and the villains with whom she grapples. Most significantly, each profile offers an analysis of the hero's story and her impact on popular culture.