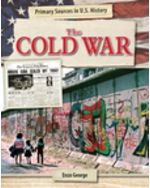 Following World War II, Europe was divided in half: the democratic West, protected largely by the United States, and the communist East, controlled by the Soviet Union. In the decades that followed, the U.S. and Russia would compete for superiority in a conflict that came to be known as the Cold War. This title, aimed at students Grades 4+, explores the nuclear arms race, the conflicts in Korea and Vietnam, and the space race through first-hand accounts.