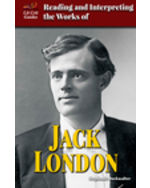 Jack London’s stories of adventure in the early twentieth century captured the imagination of the American public. As he ventured around the United States and the globe, he documented his adventures through his writing. Through excerpts and critical analysis, readers will examine London’s most famous works (The Call of the Wild, “To Build a Fire”), which are dramatic and compelling stories of man versus nature and versus himself. Other works explore the human condition, particularly the plight of the poor and working class. An examination of the autobiographical nature of many of London’s stories gives the reader a unique insight into the interaction between a writer’s world and his work.