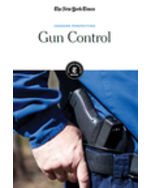 With the spate of mass shootings in schools and crowded public venues in recent decades, gun control in the United States has become a perennial topic in the national conversation. Conflicts in the debate on gun control include the Second Amendment, the NRA, common sense gun laws, public safety, and more. Through this collection of articles, readers will witness how the discussion of gun control has evolved from the 1960s through today, from the political assassinations of significant figures such as John F. Kennedy and Martin Luther King, Jr. to the Orlando nightclub massacre and the school shooting in Parkland, Florida in 2018.