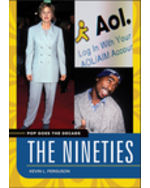 This title explains the American 1990s for all readers. The book strives to be widely representative of 1990s culture, including the more obvious nostalgic versions of the decade as well as focused discussions of representations of minority populations during the decade that are often overlooked. It covers a wide variety of topics to show the decade in its richness: music, television, film, literature, sports, technology, and more. It includes an introductory timeline and background section, followed by a lengthy Exploring Popular Culture section, and concludes with a brief series of essays further contextualizing the controversial and influential aspects of the decade. This organization allows readers both a wide exposure to the variety of experiences from the decade as well as a more focused approach to aspects of the 1990s that are still resonant today.