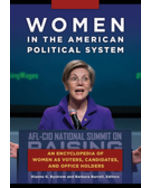 Women in the American Political System: An Encyclopedia of Women as Voters, Candidates, and Office Holders, 1st Edition

This book provides an encyclopedic sourcebook on the evolution of women's involvement in American politics from the colonial era to the present, covering all of the individuals, organizations, cultural forces, political issues, and legal decisions that have collectively served to elevate the role of women at the ballot box, on the campaign trail, in Washington, and in state- and city-level political offices across the country. The in-depth essays document and examine the rising prominence of women as voters, candidates, public officials, and lawmakers, enabling readers to understand how U.S. political processes and institutions have been--and will continue to be--shaped by women and their perspectives on American life and values. The entries cover a range of women politicians and officials; female activists and media figures; relevant organizations and interest groups, such as Emily's List, League of Women Voters, and National Right to Life; key laws, court cases, and events, such as the Nineteenth Amendment, the Equal Rights Amendment, the Seneca Falls Convention, the passage of Title IX, and Roe v. Wade; and other topics, like media coverage of appearance, women's roles as campaign strategists/fundraisers, gender differences in policy priorities, and the gender gap in political ambitions. The text is supplemented by sidebars that highlight selected landmarks in women's political history in the United States, such as the 2012 election of Tammy Baldwin, the first openly gay U.S. senator.