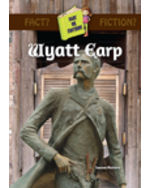 Wyatt Earp is a legend of America's Wild West. Books, movies, and television shows portray him as a fearless lawman who was quick with a gun and able to take down outlaws in one gunfight after another. The truth is that Wyatt Earp rarely had to shoot to keep the Wild West's outlaws under control. Then came the famous Gunfight at the O.K. Corral, and Wyatt became an outlaw himself. What is the truth about Wyatt Earp, and why do people believe the things they do about him? Read this exciting book to find out what is fact and what is fiction about one of America's most notable heroes.