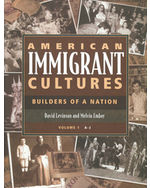 These two-volumes are the key to opening the door to the immigrant experience in the United States. This set covers 161 nonindigenous cultural groups currently living in the United States. It discusses both European groups that have been components of American culture for centuries and those groups who arrived in the twentieth century and are therefore less assimilated and more culturally distinct. From the Acadians to the Zoroastrians, it discusses the unique cultural characteristics of each group including detailed immigration and settlement histories, language, economic patterns, housing, religion, marriage, family and kinship, relations with other ethnic groups, as well as discrimination experienced by the group.

"Social historians, history students, and anyone interested in the complex society of the United States will find this a valuable reference work. It is recommended for all libraries." -- ARBA 1999

"Often included is information on trends in discrimination toward and ethnic group. Conclusions at the end of most articles offer good starting points for further study."-- ARBA 1999

"...an extensive 2-volume reference work profiling 161 ethnic groups who came to America, either forcibly (enslavement or exile) or voluntarily. The editors took a broad approach, defining 'ethnicity' as 'if members of the group or members of other groups consider it to be a distinct cultural entity.'" -- ARBA 1999

"A definitive reference work about 161 nonindigenous cultural groups living in the United States accompanied by bibliographies and two hundred black and white photographs. Signed articles by scholarly contributors are alphabetically arranged, and extensively indexed -- Inclusive in nature, the work devotes, for example, ten articles to the major ethnic immigrant groups from India and four articles about Mexicans. From the well-know Mexicans and Amish to the Miens, Igbos, and Tongans, this compendium is impressive and readable. The appendices include statistical tables reporting total ethnic group populations, state-by-state distributions from the 1990 census, calendars of holidays and religious observances."-- Knowledge Quest, publication of the AASL (June 1998)