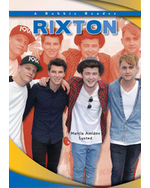 Rixton started out as a hometown band in Manchester, England. Now they are on their way to being international superstars. Their songs have reached the top of the musical charts in the United States and England. They have appeared on the Teen Choice Awards and The Voice. Rixton’s concerts become more popular all the time, and they have performed with superstars like Justin Bieber and Ariana Grande. But they aren’t just another boy band. Meet the four guys, who are members of the Rixton band, learn where they came from, and how they went from unknown to famous in just a few years.