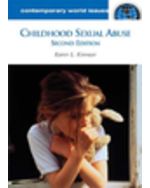 Even though it is as old as human history, child sexual abuse has generally remained a dark and well-hidden secret. Only in the last few decades has it become a topic of open public debate and scientific research, and we still have more questions than answers. How often are accusations of sexual abuse legitimate, and how often are they the result of false memories? Can sexual offenders be cured, or will they ultimately re-offend? These are only a few of the difficult questions this volume seeks to answer. CHILDHOOD SEXUAL ABUSE: A REFENCE HANDBOOK explores the many ways we define child sexual abuse in the United States and in different parts of the world and how those differences are represented in U.S. and international laws. It summarizes what we know about how to intervene, treat, and prevent childhood sexual abuse effectively and tells the stories of individuals who have had a dramatic effect on the handling of childhood sexual abuse. For students, social workers, teachers, policymakers, parents, and concerned citizens, this work offers a one-stop, multifaceted discussion of one of the major issues facing children and their families.