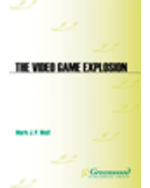 The Video Game Explosion: A History from PONG to PlayStation and Beyond, 1st Edition

The Video Game Explosion: A History from PONG to PlayStation and Beyond traces the growth of a global phenomenon that has become an integral part of popular culture today. All aspects of video games and gaming culture are covered inside this engaging reference, including the leading video game innovators, the technological advances that made the games of the late 1970s and those of today possible, the corporations that won and lost billions of dollars pursing this lucrative market, arcade culture, as well as the demise of free-standing video consoles and the rise of home-based and hand-held gaming devices.

In the United States alone, the video game industry raked in an astonishing $12.5 billion last year, and shows no signs of slowing. Once dismissed as a fleeting fad of the young and frivolous, this booming industry has not only proven its staying power, but promises to continue driving the future of new media and emerging technologies. Today, video games have become a limitless and multifaceted medium through which Fortune 500 corporations and Hollywood visionaries alike are reaching broader global audiences and influencing cultural trends at a rate unmatched by any other media.