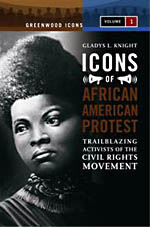 Protest has always been a catalyst for change. Did not the first immigrants help America take its first steps upon the road to greatness when they long ago protested against the oppression of their native government and established new edicts promoting the ideals of freedom and opportunity? Since the first African slave was forced to board a ship bound for this continent, protest has been a major motif in the African American experience. It was a critical weapon during the raging violence against blacks following the end of Reconstruction, the Jim Crow years, and against the grisly conditions in the ghettoes in the North. Throughout history protest has been used to combat economic and political oppression, racism, discrimination, and exclusion from mainstream America. Icons of African American Protest reveals the extraordinary strength, courage and sacrifice displayed by individuals for the cause of freedom and civil rights. The 24 leaders showcased here cover a broad spectrum of descriptors — vibrant, tame, intense, aggressive, and diffident — and their politics ran the gamut from conservative to ultra-radical. Nevertheless, whatever techniques, modes, or tactics employed — such as Thurgood Marshall's legal fights in the court room, Dr. King's reliance on nonviolent civil disobedience and direct action, and Huey P. Newton's advocacy for armed self-defense — they were all, in their time, radicals who strove to eradicate racism and the climate of exclusion.

This two-volume reference provides both students and general readers in-depth coverage of contemporary voices of protest, supplemented by sidebars on major turning points, freedom songs, and important symbols, such as the clenched fist of the Black Power Movement. Also included are a timeline of key events, historical documents, a glossary, and a thorough bibliography of print and electronic resources to encourage further research.