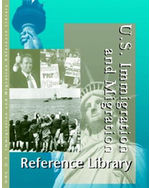 U.S. Immigration and Migration chronicles and interprets the phenomenal waves of immigration to the United States from the earliest times through the period from 1820 to 1930, when the United States was the destination of some 60% of the world's immigrants -- up to the present day, when restrictive policies have temporarily stanched the flow of immigrants.

Features include 300 black-and-white illustrations, including about 10 maps; chronology; sidebars; words to know; research and activity ideas; further reading; and a subject index. The Almanac volumes tell of the economic, religious and political forces that compelled people to seek a better life in a new land. These same forces later inspired the migration of many Americans to other areas in mass movements such as the Westward Expansion; the rural to urban migration; the Great Migration of blacks in the early part of the 20th century; and the migration to the Sunbelt starting in the 1960s. The Biographies volumes bring the panorama of immigration and migration to a personal level by profiling both prominent and less well-known people of the immigrant experience. Insights into the movement of people are provided in the Primary Sources volume via excerpts from key documents as well as personal observations from immigrants and concerns about the rise in U.S. immigration from conservative talk-show host Patrick J. Buchanan.

"The Almanac volumes give a comprehensive overview of the groups of people who have immigrated to the United States from various nations, as well as the people who migrated within the United States to unexplored areas or to newly industrialized cities.The Almanac includes a very good glossary as well as an area with research and activity ideas that would be useful to teachers to incorporate into their classes. The articles about the various immigrants and their cultures in the Almanac are complete, current and very readable... This set is appropriate for grades eight through ten and is an excellent resource especially if the resources one has on U.S. immigration and migration are older." -- Catholic Library World (March 2005)