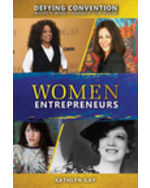 Before the twentieth century, women were expected to be housewives and caregivers. Business was left to the men. Still, out of necessity, thanks to family privilege, or simply because they had a good idea, there were some women who became successful entrepreneurs. Their success inspired other women, who in turn inspired others, until women became fixtures in the business world. Readers will learn about the women who followed their instincts and rose to the top of a man’s game. Also included are chapter notes, a glossary, a further reading section containing books and websites, and an index.