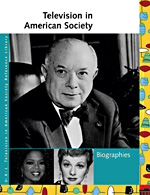 Focused on a popular topic, this exciting collection gives students and teachers substantial material for discussion and research. The Television in American Society Reference Library shows how television has reflected and influenced American society and culture throughout its history, covering both positive and negative effects. Accessible and interesting as well as informative, included are illustrations and sidebars, clear prose, and ideas for activities, research and further reading. A subject index, chronology and words-to-know section are among the many other features supporting student achievement.