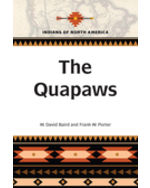 The Quapaws, part of the Indians of North America series, presents a fascinating portrayal of the history and culture of these native people. The Quapaws were once sovereigns of the region where the Arkansas River enters the Mississippi, a strategic location that led France, Spain, and the U.S. to vie for the allegiance of this once-powerful tribe. However, as settlers clamored for more land east of the Mississippi, the government forced the Quapaws to relocate in 1834 to the northeastern corner of Indian Territory (now Oklahoma). There, the tribe would suffer extreme poverty after the Civil War but later prospered by leasing their lands, first to ranchers in the 1870s and then to mine operators in the 1920s.