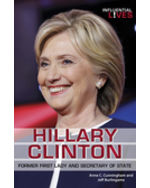 Hillary Clinton is arguably one of the most polarizing political figures in American history. She burst into the national spotlight during her husband’s presidential campaign, when she managed to both impress and offend the American public. Since then, Clinton has proven herself a capable public servant, with successful terms in the US Senate and as secretary of state. But controversy continually threatens to undermine her accomplishments, and it often seems that her ambitions get the best of her. This biography tells the story of the rise of remarkable woman, from her humble Midwestern beginnings to a historic run for the White House.