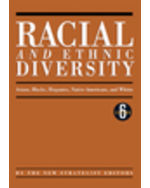 Racial and Ethnic Diversity is a profile of a U.S. population that is growing more diverse much faster than many had predicted. Designed for easy use, it is divided into five sections devoted to the major racial and ethnic groups: American Indians, Asians, Blacks, Hispanics, and Non-Hispanic Whites. A sixth section provides comparative data for the total population. Also included is a seventh section on attitudes by race and Hispanic origin. Within chapters, where data are available, identically structured tables appear for each racial group.