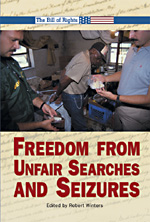 Outraged by royal officials' ability to search homes and even individuals at will, and seize whatever they considered "contraband," Americans were determined to limit the search and seizure powers of the new federal government. Since then, the Fourth Amendment has become the basis for numerous rules limiting the gathering and use of evidence by police and prosecutors.

The Bill of Rights Series

The Bill of Rights protects the most cherished American liberties. Freedom of speech, freedom of religion, the right to bear arms, the right to a jury trial - these are but a few of the freedoms codified in the first ten amendments to the U.S. Constitution. And although it was written into law more than two hundred years ago, the Bill of Rights is not a static document. Its clauses have been subject to close scrutiny, interpretation, and reinterpretation time and time again. Its words have been featured in heated debates over some of the most divisive issues facing the nation, including the role of religion in the schools, the line between obscenity and art, and the fairness of the death penalty. THE BILL OF RIGHTS series highlights the living and breathing nature of this important founding document. Each anthology focuses on one civil right guaranteed by the amendments and traces its evolution throughout American history to the present. Primary documents - including landmark Supreme Court rulings - reveal the ongoing effort to define the exact meaning of the text and apply its abstract concepts to real-world cases. Secondary sources, including magazine articles and book excerpts, add an additional layer of analysis and commentary. Taken together, the volumes of the BILL OF RIGHTS series illuminate the defining ideals of American democracy. While Gale strives to replicate print content, some content may not be available due to rights restrictions. Call your Sales Rep for details.

"...144 pages of detail on the history and intention of the law. The introduction provides context, bibliographical references throughout invite more research, and court cases and issues are surveyed." --Midwest Book Review, January 2006