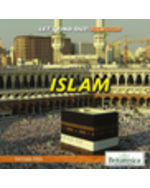 Over 1,400 years ago, the teachings of the Prophet Muhammad gave way to a community of followers who have since grown to the second-largest religion in the world today. The word "Islam" itself means "submission," and Muslims are those who submit themselves to the teachings of Muhammad and the Koran. Abounding with images and informative sidebars, this elementary-level text introduces readers to the primary beliefs and practices of a widely misunderstood religion, including the role of prayer, Mecca, and holidays such as Ramadan. In addition to its history, there is a spread dedicated to the important role of Muslim-Americans in U.S. society.