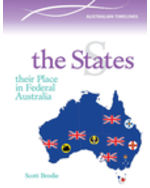 The States: Their Part in Federal Australia, 1st Edition

The Australian states came into being as six colonies of the British Empire. Between 1788 and today they evolved into an integral part of the Commonwealth of Australia. This book follows the development of the individual states from their colonial beginnings to today. We examine the way each colony gained self-government and how each eventually agreed to become part of a federal Australia.