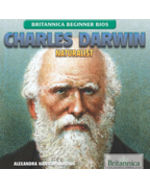 Charles Darwin lived in the Victorian era, a time of great change. Many people were debating how life on Earth began. In his twenties, Darwin went on a five-year sea voyage around the world. It shook up his ideas about how life evolved. His radical new insight, natural selection, was so controversial that he feared revealing it for more than twenty years. His classic, "On the Origin of Species," has been called the best science book ever written; it revolutionized biology. This book for young readers reveals the struggles that Darwin faced as he presented his powerful ideas to the world.

Front Cover.
Title Page.
Copyright Page.
Contents.
1: A Man Whose Idea Changed the World.
2: “Shooting, Dogs, and Rat-Catching”.
3: Around the World on the Beagle.
4: Developing a Theory.
5: Keeping a Secret.
6: On the Origin of Species and Beyond.
Timeline.
Glossary.
For More Information.
Index.