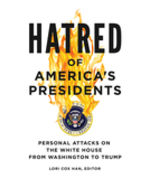 Hatred of America's Presidents: Personal Attacks on the White House from Washington to Trump, 1st Edition

People involved or simply interested in politics often ask whether today's political environment is more toxic than ever before. This book presents an impartial and authoritative history of invective toward the White House, so readers can determine the answer for themselves. It focuses on the most representative and commonplace attacks of a vitriolic and personal nature, detailing who instigated and trafficked in the attacks and how presidents, administrations, and political parties defended themselves. It also illustrates how honest disagreements about policy-such as FDR's New Deal, Ronald Reagan's Central America policies, George W. Bush's invasion of Iraq, and Barack Obama's Affordable Care Act-fueled expressions of hatred and condemnation. Finally, the book includes perspectives from both the right and the left on the legitimacy of these attacks and the victims' defenses as well as their impact on American politics and policy.