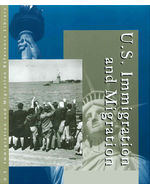 The Human Genome Diversity Project tells us that between 15,000 and 30,000 years ago people from Mongolia crossed Beringia to what we now call the Americas. U.S. Immigration and Migration chronicles and interprets the phenomenal waves of immigration to the United States from the earliest times through the period from 1820 to 1930, when the United States was the destination of some 60% of the world's immigrants -- up to the present day, when restrictive policies have temporarily stanched the flow of immigrants.

Insights into the movement of people are provided in the Primary Sources volume via excerpts from such key documents as the Maryland Toleration Act (1649), the Treaty of Fort Stanwix (1784), the Homestead Act (1862), the Chinese Exclusion Act (1882), and the Immigration Act (1924), as well as personal observations from two Mexican immigrants and concerns about the rise in U.S. immigration from conservative talk-show host Patrick J. Buchanan.

"U.S. Immigration and Migration is a five-volume set of biographical information, primary sources and an almanac with a handy cumulative index to find exactly what you are researching. The Primary Sources contain excerpts from eighteen documents. These documents, written by the people who lived and helped mold the story of U.S. immigration and migration, provide a range of perspectives on this period of American history." -- Catholic Library World (March 2005)

"These excellent reference texts provide information on the American Immigrant experience from the earliest times to the significant periods from 1820 to 1930 to today when immigrants to this country find more obstacles to attaining citizenship. The information is historic and timely including references to 9/11 and beyond. Also included are discussions as to why the immigrants came to America, how they assimilated, and information regarding significant contributions of immigrants to American society." --Pennsylvania School Librarians Associations, May 2006