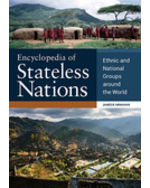 Encyclopedia of Stateless Nations: Ethnic and National Groups around the World, 1st Edition

This book addresses the numerous national movements of ethnic groups around the world seeking independence, more self-rule, or autonomy—movements that have proliferated exponentially in the 21st century. Each ethnic group receives an alphabetically organized entry containing information such as alternate names, population figures, flag or flags, geography, history, culture, and languages. All the information readers need to understand the motivating factors behind each movement and the current situation of each ethnic group is presented in a compact summary.