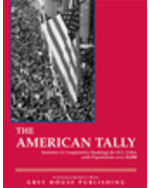 This important statistical handbook compiles, all in one place, comparative statistics on all U.S. cities and towns with a 10,000+ population. Originally published in 1993 by Toucan Valley Publications, this second edition is the first by Universal Reference Publications, an imprint of Grey House Publishing. It represents thousands of hours sifting through enormous U.S. Census Bureau files for specific combinations of data that define who we are as Americans. Using a unique formula of human statistics, including age, education, employment, ethnicity and language, The American Tally: Statistics & Comparative Rankings for U.S. Cities with Populations over 10,000 illustrates subtle differences that give each city and town its unique culture and character.

The value of The American Tally doesn't stop with statistics, however. What makes this book extraordinarily valuable are the comparative ranking sections, allowing the user to immediately compare town to town, city to city, state to state.

This edition of The American Tally profiles more than 4,000 places in America with populations of over 10,000. This is almost 1,000 more places, dozens more categories, and more than 300 more pages than the first edition. You'll find statistics and comparative rankings in more than 50 topics, other than size, that define cities and towns from Boston to Berkeley.

The American Tally is divided into seven chapters:

"...this guide could be useful in both academic and public libraries." --Lawrence Looks at Books, June 2003