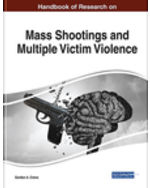 The phenomena of mass shootings appear to be on the rise. Within the past decade, shootings have occurred in schools, religious institutions, concerts, movie theaters, and other public venues, as well as at home in the form of domestic mass shootings. This phenomenon is influenced by factors such as access to guns, mental illness, desire for fame, revenge from being bullied, and copycat killing to name a few. Mass shootings are a serious problem for society and must be explored further in order to provide preventive solutions. This pivotal reference source provides vital research on contributing factors to gun violence, characteristics of shooters and victims, solutions for preventing incidents from occurring, and the impact they have on the community. Topics include school safety, cyberbullying, and mental illness. For law enforcement, government officials, psychologists, psychiatrists, sociologists, politicians, policymakers, law makers, academicians, researchers, and students.