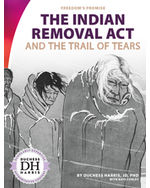 
Freedom's Promise: The Indian Removal Act and the Trail of Tears, 1st Edition

In the early 1800s, white Americans sought out more lands. The 1830 Indian Removal Act allowed the US government to trade lands with Native Americans. But officials often forcibly removed Native peoples from their homelands. This book describes this period of forced removal and its lasting effects. Easy-to-read text, vivid images, and helpful back matter give readers a clear look at this subject. Features include a table of contents, infographics, a glossary, additional resources, and an index. Aligned to Common Core Standards and correlated to state standards. Core Library is an imprint of Abdo Publishing, a division of ABDO.