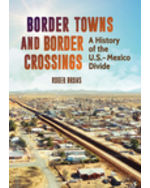 
Border Towns and Border Crossings: A History of the U.S.-Mexico Divide, 1st Edition

The U.S.-Mexican border is far more than a line that separates two countries. A winding path of nearly 2,000 miles from the Pacific Ocean to the Gulf of Mexico, it is history, commerce, and culture. In recent years, however, attitudes about border crossings and border issues have hardened as has immigration policy. A source of growing anxiety over illegal immigration, national security, and safety, the border has become a symbol of political cataclysm over immigration law and enforcement, the future of DACA, the increasingly harsh treatment of refugees and others who attempt to cross without authorization, and the future of U.S. policy. This book traces the history of the border and its people, from the creation of the border line to explosive issues surrounding immigration and the future of the US as a nation of diverse cultures and races.