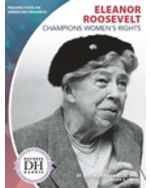 Eleanor Roosevelt is well known for her time as First Lady of the United States, but she also made important contributions to women's rights before, during, and after her husband's presidency. This book examines her efforts from multiple perspectives, including those of Roosevelt herself, her husband, Franklin, and later feminist activists. Easy-to-read text, vivid images, and helpful back matter give readers a clear look at this subject. Features include a table of contents, infographics, a glossary, additional resources, and an index. Aligned to Common Core Standards and correlated to state standards.