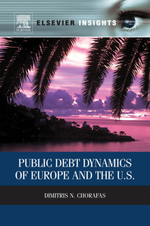 Public Debt Dynamics of Europe and the U.S., 1st Edition

Public Debt Dynamics of Europe and the U.S., provides the evidence and implications of current policies by sovereigns and central banks, in dealing with the debt abyss.  It brings in perspective the diversity of opinion reigning in modern economics and finance and outlines the themes which, among themselves, are defining the society in which we live. Our epoch has accepted the theory that leveraging is good for a person, a company or even a nation. This has led to the debt syndrome and its disastrous aftereffects. Throughout the book evidence emerges that piling up public debt can lead to an unmitigated disaster. This is demonstrated through case studies on Greece, Spain, Italy, France and the United States – in short, those western countries that nowadays have lost control of their senses and of their economy. This book uses real life examples, using case studies as evidence of good and bad approaches to social, economic and financial life. Live events also help as undisputable demonstrators of successes and failures in the search for solutions in getting out of the hole western governments find themselves. As Denis Healey, a former British chancellor of the Exchequer, once said: “The first law of holes is that if you are in one stop digging.Provides insight and implications on the current policies of sovereigns and central banks Uses real life practical examples and case studies on Greece, Spain, Italy, France and the United States Examines developing countries, particularly BRICS, and their exposure to debt Focuses on public health and the effects it has on the economy

Front Cover.
Half Title Page.
Title Page.
Copyright Page.
Contents.
Preface.
1: The West Today.
2: Globalization of a Casino Society.
3: Kingdoms of Debt.
4: Options for this Decade.
5: Destiny in the Land of Homer.
6: The Greek Economy Pays the Price of Drift.
7: Impact of Bailouts on the Economy of a Sovereign.
8: Drachmageddon: Exit from Euroland and Bankruptcy? Or Bankruptcy Within Euroland?.
9: Case Studies with Teetering Sovereigns.
10: Spain in Free Fall.
11: Italy Tries a U-Turn on the Road to Nowhere.
12: France is Not Italy. True or False?.
13: Who Killed the Golden Eagle?.
14: Public Health Care is the No. 1 Suspect.
15: Public Debt, Balanced Budgets, and Current Accounts.
16: The Merger of Quantitative Easing and Politics is the No. 2 Suspect.
17: Returns are Not Rising Forever.
18: Storm Clouds Over the Brics.
19: Which Therapy? Where are the Doctors?.
20: Iceland, Latvia, Ireland, Britain, Germany, and a Taste of Fantasy Economics.
21: Ineptocracy and the New Policy of Grabbing.
Case Study and Conclusion.