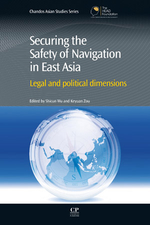 Securing the Safety of Navigation in East Asia, 1st Edition

Safe navigation of the seas is of global importance. Sea lanes provide vital connections for the growth of the global economy and the wellbeing of people everywhere. The sea lanes are of particular importance for the East Asian region, as most trade is undertaken on the ocean. Booming economies in the region such as China and Vietnam put more pressure on sea lanes, triggering concern for the safety of navigation. Securing the Safety of Navigation in East Asia identifi es salient issues for academic debate, and further explores those that have practical implications for the safety of navigation in East Asia. Contemporary maritime security concentrates on safe navigation and inhibiting transnational crimes, including sea piracy and maritime terrorism. Maritime environmental security and search and rescue at sea are also important. Securing the Safety of Navigation in East Asia is structured into four sections: the first part introduces the topic, and looks at the safety of navigation and the search for a cooperative mechanism. The second part considers the international legal framework and its implications for East Asia. The third part presents national perspectives on the safety of navigation, and fi nally part four considers navigational issues in the South China Sea.