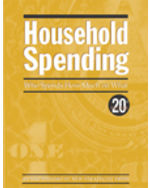 Household Spending: Who Spends How Much on What, 20th Edition

Americans are spending money, but only those who are on top of the trends will know who the spenders are. The all-new 20th edition of Household Spending: Who Spends How Much on What reveals who spends and the products and services they buy. Included in the 20th edition is a comparison of spending trends before (2000–06) and after (2006–13) the Great Recession. Based on unpublished data collected by the Bureau of Labor Statistics’ 2013 Consumer Expenditure Survey, this work examines how much American households spend on hundreds of products and services by the demographics that count: age, income, household type, region of residence, race and Hispanic origin, and educational attainment. It is intended for marketers, advertisers, small businesses, large corporations, entrepreneurs, consultants, business students, and the libraries that serve them.