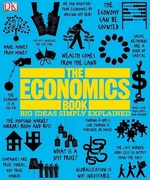 The Economics Book makes sense of historically important and emerging ideas in a field of science that so often confuses newcomers to the subject. DK's clear visual approach has already been applied effectively to the areas of philosophy and psychology; economics is the natural successor in the series. With the use of easy-to-follow graphics, succinct quotations, and thoroughly accessible text, this book throws light on the theoretical and experimental foundations, as well as the practical applications-of economics, making abstract concepts concrete by relating them to everyday concerns. From Aristotle and Thomas Aquinas to so-called "father of modern economics" Adam Smith, John Maynard Keynes, and the top economic thinkers of today, this book will take you on a journey through centuries of thought, elucidating even the most complex of concepts. The Economics Book is the essential reference for students and for anyone with an interest in how economies work. This book is organized as a history of economics. Within each chapter, the big ideas and the economists who first voiced them are placed chronologically and are cross-referenced to earlier and later theories and their proponents. The book is completed with a directory of economists, along with a comprehensive glossary.