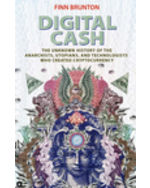 Digital Cash: The Unknown History of the Anarchists, Utopians, and Technologists Who Created Cryptocurrency, 1st Edition

This title tells the fascinating untold story of digital cash and its creators—from experiments in the 1970s to the mania over Bitcoin and other cryptocurrencies. Bitcoin may appear to be a revolutionary form of digital cash without precedent or prehistory. In fact, it is only the best-known experiment in a long line of similar efforts going back to the 1970s. This book reveals how technological utopians and political radicals created experimental money to bring about their visions of the future: protecting privacy or bringing down governments, preparing for apocalypse or launching a civilization of innovation and abundance that would make its creators immortal. The story takes us from autonomous zones on the high seas to the world’s most valuable dump, from bank runs to idea coupons, from time travelers in a San Francisco bar to the pattern securing every twenty-dollar bill, and from marketplaces for dangerous secrets to a tank of frozen heads awaiting revival in the far future.