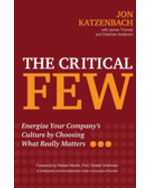 Without a deep understanding of your company's culture, any change effort you undertake will fail. The coauthors identify the four most critical cultural elements leaders need to focus on. In a global survey, 80 percent of respondents believed that their organization must evolve to succeed. But a full quarter of them reported that a change effort at their organization had resulted in no visible results. Why? The fate of any change effort depends on whether and how leaders engage their culture: the self-sustaining patterns of behaving, feeling, thinking, and believing that determine how things are done in an organization. Culture is implicit rather than explicit, emotional rather than rational--that's what makes it so hard to work with, but that's also what makes it so powerful. This book lays out the Katzenbach Center's proven methodology for identifying your culture's four most critical elements: traits, keystone behaviors, authentic informal leaders, and metrics.<\P>